Posted on 8th December 2012 by rfurzer

OK, it’s been a while since I’ve written anything. Sorry about that. Life and stuff have just kind of happened. I have been doing interesting things, honest. Things that you might care about, truly. I just haven’t written about them. OK, apology over with, let’s move on. A few weeks back, Leigh from The Good Stuff : Good Beer. Good Food. Good People invited a few gluttonous reprobates to post their Christmas Day menus together with beers pairings for each course. The only caveat was to ensure the beers suggested are readily available. Now I was really keen to bring into the menu some of my beers of the year. Those beers that have set benchmarks for particular styles or have meant something very special to me. So, all the beers below are available, but you won’t be able to rock up to your local supermarket and snaffle them off the shelves. You’ll need to go online and visit some of  these sites: Beer Merchants, Beer Ritz, Summer Wine Brewery, The Bottle Shop

I like to keep celebratory feasts simple and I buy the crab already dressed (£4 for 2 at Sainsbury’s).  I have prepared dressed crab before but I’d be lying if I said it was worth the effort. I’d rather claw back the time and any shred of dignity and fork out £2 for someone else to do it. Potted shrimp, on the other hand, is very simple.

Melt butter, add spices to taste, divide prawns into two ramekins (if you buy Gü puds you’ll have a stack of these). Pour half of melted spiced butter into each. Allow to cool, and then refrigerate. Buy the best salmon you can. It’s Christmas. Serve all of the above with toasted bread (baguette, 5 cereal, sour dough, knock yourself out).

Where to start with this angel of mercy. If you haven’t tried Table Beer yet, please seek it out. Where Redemption Brewing Company Trinity set the benchmark last year, Table Beer has, in efffect, taken the recipe and made it at The Kernel. As with all Kernel beers the hops change based on availability. Version 1 (3%) had more festive tangerines (Columbus?) whereas Version 2 (3.2%) has more mandarin and orange barley crush. An absolute winner with the crab. 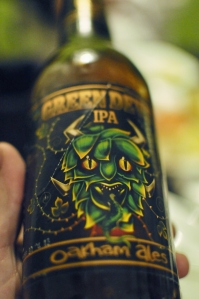 Oakham Green Devil is another banger that is now a permanent fixture in my beer fridge. At 6% there’s more alcohol and hop bitterness than Table Beer. The Citra here starts floral then opens into pineapple and mango sweetness and follows up with a greengage/lime tang as the bitterness draws out the finish. The beer is too dominant for the crab but works beautifully with the spiced potted shrimp. 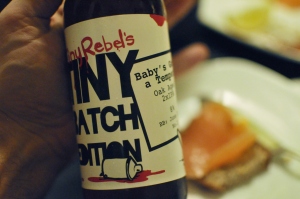 Tiny Rebel Baby’s Got a Temper  is a double IPA aged on oak chips. I was hoping that this would win hands down with the smoked salmon, but found that the vanilla from the chips was too much for the dry hops (Citra and Columbus). The beer reminds me of the white rabbit sweets, and because of the balance, I’d pair with a pudding in future.

Hmmm… so what to have with the Smoked Salmon?

OK, cheating a bit here, as BAD SCCANS is rare as hen’s teeth, but it’s Christmas. And it’s my birthday beer. It’s my baby.

I chose the Galaxy dry hopped to go alongside the oak smoked (whisky barrel) salmon. Now BAD SCCANS is a big old mofo (10.5%) but the maltbill works with the alcohol and the vanillins from the barrel. The Galaxy adds a dash of papaya and mango to the mix. And then there’s the whisky influence. I have long been a fan of whisky and smoked salmon – the salinity and smoke of the cure is enhanced and amplified by the barley and rich unctuousness derived from years in the barrel. A whisky BA Double SCCANS was the obvious choice (to me).

The Norwegian Christmas meal Ribbe (belly pork) is traditionally served with boiled potatoes, two types of sausage, cabbage and pickles. Over the last 10 years, I have been tweaking this meal, bringing in components from different cuisines and am now happy with it. And there are no potatoes. On a day of feasting I don’t want carbs to get in the way of me consuming vast quantities of meat and cheese. Laters potatoes. My general rule of thumb for cracking crackling is score the skin, rub in salt and pepper, and leave in fridge, uncovered for at least 24 hrs (skin side up). This recipe is for a piece around 2kg on the bone. 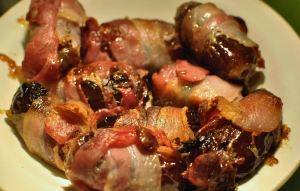 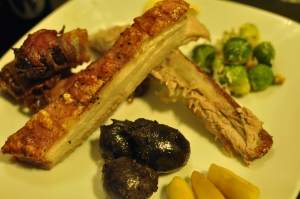 There are a whole host of big flavours on the plate and  I wanted to find a darker beer that wasn’t too heavy to work with the main course. Traditionally in Norway you’ll have Bayerøl or Juleøl, both dark lagers, Dunkels if you will, with the Juleøl traditionally being stronger and spiced. 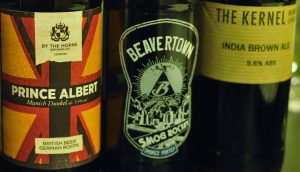 So how did they work with the ribbe?

By The Horns Prince Albert is a 5.5% Munich Dunkel. I’ll have to admit, I had the strongest hopes for this beer with the main course as it’s in effect a Bayerøl. Unfortunately the bottle I had was Brett infected, so it became impossible to judge how it would’ve of worked as the horse blanket/funk dominated the beer. But, and it is a big but, Brett beers can work with pork & black pudding. The funk cuts straight through the fat but the beer is a little too thin and unbalanced by the Brett for a successful match.

The Kernel India Brown is a 5.6% hopped brown ale. Classic juicy Kernel nose and rich mouthfeel but my initial concern was that the coffee notes from the dark malt may overshadow the pork. But then the beer opens.  The grains journey from coffee to chocolate and it’s this change that really nail the match with the belly pork and the Morcilla. The chocolate vibe is stunning with the devils. Hmm, chocolate, bacon and dates. Nom Nom. The hop finish seems a little out of place until you crunch through the gherkin, and the sour pickle and IBUs make sweet love. Well not really, but you get my drift.

Beavertown Smog Rocket is a 5.4% smoked porter. Had this beauty had a lighter smoke, it would’ve won hands down. It was phenomenal with the devils (stilton and smoke – yeah). It was also sublime and very grown up with the Morcilla. But it stole too much from the pork. That said there were elements from each beer that sang with the food. I just think there’s more ‘research’ needed to find the perfect match. Either that or I need to make a light smoked beer at around 4.5% with a rich mouthfeel and a hint of chocolate.

Ribbe is not for beer and beer alone though. You need Aquavit. Proper, across the equator twice, Linie Aquavit. And that means the caraway goodness that is Throndhjems Aquavit. Skål! 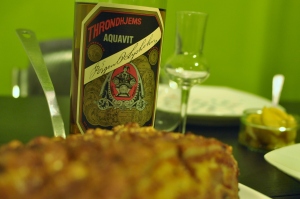 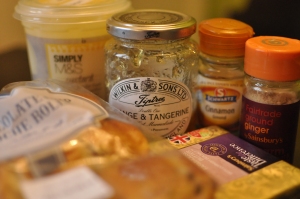 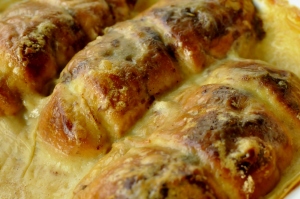 Only ever gonna be one choice here. Looking for a big bad coffee and vanilla and chocolate stout, and barrel aged to boot? Kopi Kat Clynelish all the way. And remarkably (truly remarkably) still available here. Get yourself a coffee-chocolate-orange-vanilla-fest and marvel. 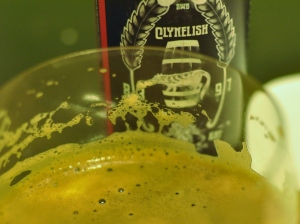 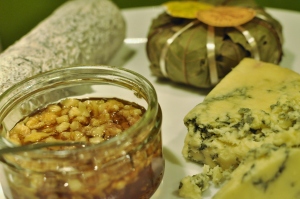 This feast is actually what I ate yesterday, and to say I’m still feeling full is somewhat of an understatement. The small selection of cheeses on this board is entirely down to  our inability to fit any more food in (we ate the Époisses today).

If I’d had a vintage cheddar on the board, I’d a grabbed a Fullers Vintage Ale which is my go to beer for hard cheese.

The only cheese that didn’t pair up was the Vache de Chalais. The one I bought was very young and chalky, and really too light for the beers served alongside. A decent Saison or Blonde would’ve work beautifully but more as part of a lunch than an end of year blow out.

The Sainte-Maure paired well with the BAD SCCANS Galaxy but that’s not a great surprise, Double IPAs with less assertive hop presence and bigger caramel backbones have an affinity with the Caprylic acid found in goats cheese, lamb and apricots (tagine anyone?).

The Stilton, as mentioned in the main course, loves a bit of a smoke, and worked really well with the Smog Rocket.

It also worked very well with a 15 year old Ron Zacapa. Not beer, but a great drink and our guests wanted rum. What you gonna do?

7 Responses to My Christmas Day Menu